An optimized algorithm based on the binary search algorithm for the usual Play It Forward technique which runs in logarithmic time.

First you should understand the Fast Play It Forward technique, which is both explained below and in the PIF page.

The first and only requirement is that the logs store the past positions of the enemy and his actual heading, which is the angle which the enemy is actually moving to (getHeadingRadians() <math> + \pi</math> when getVelocity() < 0, getHeadingRadians() otherwise). Let's suppose some state of a robot is defined by his position and his actual heading. For instance, a state can be thought as a vector (heading) fixed at a point (position) in a plane. Therefore, we can apply some transformations to it.

This means that if we play the movie forward, starting from <math>q</math>, and reach some state <math>q'</math>, then <math>T^{-1} q'</math> is the state of our enemy if we had played our movie forward starting from his current state instead of his past state. Notice that <math>T^{-1}</math> can be easily determined for our translation+rotation transformation. 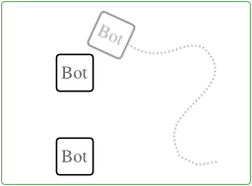 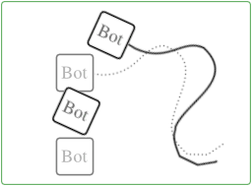 Moreover, we can apply the transformation to our current position too, so we can evaluate the bullet flight time correctly as well, as if we were in the past in the same situation as the current one. After that, we can do the inverse transformations and get the correct firing angle. This technique allows us to play our movie forward very fast in practice, because we avoid expensive trigonometric operations during the simulation. We only have these operations executed before and after the simulation. The number of iterations, though, is in the worst case equals to the bullet flight time. Can we do better than that?

Let's fix some state <math>p</math> in the movie and its successor <math>p'</math>. Note that if there is a gap of time of size <math>t</math> between these two states, we can conclude the following:

Notice that both approaches, though, assume that we can quickly access the <math>x</math>-th scan of our movie, otherwise we would have to access these scans in a inefficient way. One way to do this is to store the movies in a array instead of in a linked list, so you can have them directly accessed by their indices.

The first thing we have to do when binary searching is to determine the range of values our <math>x</math> can assume. We know that in this case it ranges from 0 to the max bullet flight time. Let <math>b</math> be the bullet speed and <math>d</math> be the distance of the enemy from the bullet source. A good upper bound for the real bullet flight time is <math>\lceil \frac{d}{b-8} \rceil</math>, which turns out to be a pretty good upper bound for the number of scans we have to play forward as well. The final pseudo-algorithm turns to be:

The worst case number of iterations of this algorithm is in the order of <math>\log \frac{d}{b}</math>, which is way better than simulating tick-by-tick.

Note that even though we have gaps, we can use the outcome of this algorithm to interpolate the returned scan with the scan right before it to fill in any missing scan, as the monotonicity of the question is well-defined even in the continuous domain.

You can estimate what is the missing scan when the impact occurred by a simple linear interpolation of both scans, or you can even binary search again to find the perfect impact point, but the former solution is way cheaper and often give sufficiently good approximations.

Since we are not simulating the process tick-by-tick, we cannot identify when a robot comes out of the field and goes in again. We are only able to identify if its final position is inside the field. We can add some heuristics to the binary search, though, but they will only be heuristics and in many pathological cases they won't be helpful.