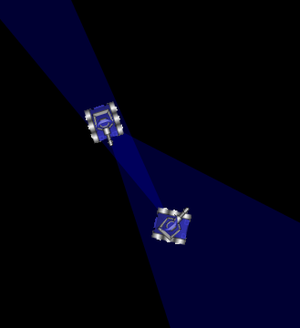 Radar is one of the most vital components of your robot. Without it, targeting is effectively impossible and movement is purely random. Just as with movement and targeting, there are many simple and complex algorithms for radar control. In most robots the radar takes up the smallest portion of code.

A radar in Robocode can turn a maximum of 45° or π/4 rad in a single tick. The radar scans robots up to 1200 units away. The angle that the radar rotates between two ticks creates what is called a radar arc, and every robot detected within the arc is sent to the onScannedRobot() method in order of distance from the scanning bot. The closest bot is detected first, while the furthest bot is detected last. By default, the onScannedRobot() method has the lowest event priority of all the event handlers in Robocode, so it is the last one to be triggered each tick.

Before you start implementing a radar, you should have:

If you haven't done all of these, do them first. Otherwise, this article will only make you more confused.

By default, Robocode hides radar arcs, to prevent visual overload. This is a good idea in large melee battles, but not when debugging your radar.

Scan arcs can be enabled in Robocode's Preferences:

Your first action in run() should always be:

This allows your robot's base, gun, and radar to rotate independently. It is practically essential for radar locks and any form of accurate targeting.

One of the first actions your robot performs should be to turn the radar as much as possible. A simple implementation would be:

This causes the radar to begin turning clockwise, forever. However, it may not be wise to always turn the radar clockwise. Sometimes, turning it counterclockwise might provide more information, faster. The optimal scan direction is the one with the shortest rotational difference to the angle between the robot and the battlefield center.

For even faster information collection, you should turn the gun (or even the robot base as well) in the same direction as the radar. Due to Robocode game physics, spinning the gun and radar at the same time will give your robot a 65° (20° + 45°) scan arc, instead of a 45° arc.

Main article: One on One Radar

One on one radars are the smallest of the bunch and many can get a scan in every turn, producing a perfect lock. This simplest lock is:

Other types of 1v1 radar include the width lock and the infinity lock.

Melee radars are more complex and take up considerably more room inside a robot. Since the field of opponents does not usually fall within a 45° area, compromises must be made between frequent data of one bot (e.g., the firing target) and consistently updated data of all bots. Common melee radars include: