RoboJogger is a user interface for RoboRunner. RoboJogger together with RoboRunner provide functionality similar to that of RoboResearch -- the ability to run robots in challenges for the purpose of testing, diagnostics, and comparison -- but with a few distinct differences. The primary advantage of Robojogger/RoboRunner is that RoboRunner uses the Robocode API to run battles rather than running Robocode through a runtime execution for each battle, reducing the amount of time it takes to run a challenge.

Versions prior to 1.0 may still have issues but are available for review to anyone who is interested. If you do try it, feedback is welcomed. Should interest in this exist and grow, I'll look into hosting it from someplace more official; for now, it's just a ZIP of jars and files hosted off my personal website.

The RoboJogger UI is being built using Skotty's existing Swing codebase as a starting point. This means some of the background code may not be entirely clean or relevant, but it will speed development considerably.

At present, there is no licensing restrictions on any of the code, as it is all written entirely by Skotty and Skotty generally doesn't bother with licenses for his own code. However, some kind of open source license may be applied to RoboJogger before it is released, provided there is any desire for such.

RoboJogger is initially set up for using Robocode 1.7.3.0. If you switch Robocode versions when running Setup, you will have to manually copy the correct robocode.jar file into the robocode_jars folder that RoboJogger uses (you will be prompted about this in the program when you run Setup). Part of the issue is that the setup function is part of the application rather than a separate script as in RoboRunner, and I therefore cannot specify a classpath via the command line like RoboRunner itself does. Instead, RoboJogger uses robocode jars from a folder named robocode_jars. When setting up with a new version, most of the jars are automatically copied into this folder, but the robocode.jar file cannot be. When RoboJogger is running, robocode.jar is in use and cannot be automatically replaced. Thus the required manual copy.

As of 0.9.7, there are still no on-the-fly results. To see the latest results, you have to close any open results summary windows and reopen them, such that they pull the latest data from the RoboRunner score log files. Also, RoboJogger calculates confidence values itself. Confidence values for individual robots will match what RoboRunner calculates, but confidence values for challenge groups and overall total will not be the same. The method RoboJogger uses is not the same as what RoboRunner uses. This will likely change in a later version. A more detailed look at computing confidence is shown in a later section.

A quick explanation of what some of the jars in RoboJogger are:

For battles against a single robot, the confidence interval calculation is reasonably simple, and both RoboRunner and RoboJogger calculate this value in the same way: X +/- 1.96 * d / sqrt(n), where X is the average of all scores, d is the standard deviation, and n is the number of battles.

However, how to calculate the confidence for a group or for the total is a more complicated question. RoboJogger and RoboRunner take differing approaches for this.

This becomes further complicated when using smart battles, as then there will be a differing number of battles for each robot in the challenge. In this case, RoboJogger pads the number of battles for robots with fewer battles by creating fake random scores for those robots where the random scores are obtained by randomly choosing a score that falls within the confidence interval for that specific robot.

First real non-beta release! This will be released once 0.9.8 has been thoroughly tested and any remaining bugs ironed out.

Prior to 0.9.7, there was a somewhat rare bug where a score log would lose some (usually most) of it's battle scores. This may have been fixed with the changes to ensure RoboRunner is shut down cleanly. However, I can't be certain, so please let me know if you encounter this bug with 0.9.7. I will be holding off on researching this further under the assumption that it is fixed until such time that someone loses data again.

Some generic notes on RoboJogger:

Main RoboJogger window (version 0.9.5). When RoboRunner is started, it will begin running any incomplete challenges in the table of challenges one at a time, starting from the top of the table, until all challenges have been completed.

(side note: the total seasons in this screenshot for each challenge is quite low because at the time I was running challenges that had over 250 robots each, and my older PC can only run about 7500 battles per day; the challenges in this screenshot represent about 2 solid days of execution on my PC; there is an advantage to this approach in that you can see the results of a lot of different challenges more quickly and you can always go back and edit the challenge runs to add more seasons) 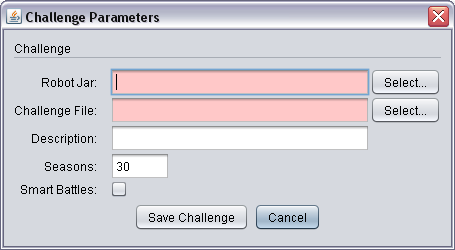 Dialog for adding a new challenge (version 0.9.7). Currently accessed via button on main window, menu item in popup menu over table, or in the main menu under: File -> New Challenge.

Window showing summary of battle results. At present, it uses the top row to show scores, and the second row to show confidence in the scores. Center data area is separate and scrollable to better handle huge challenges (suggested by Voidious).