Just wanted to say nice job with Tomcat - I only just noticed its strong performance against top bots. 57% vs both Dookious and Pris, and giving Diamond some tough battles (which is what caught my eye) - very nice! Might be time to throw it into my test bed. =) --Voidious 22:18, 1 September 2011 (UTC)

Thank you, Voidious:) And here big room for improvements, so be careful;) And Diamond already in my test bed:)

Congratulations for making the top 20. I've been trying to catch you with XanderCat, but so far you have remained consistently a few steps ahead of me. :-) Your scores against Pris and WaveSerpent are amazing. I finally came up with a flattener that helps me against the top bots, but I'm still a long ways from where you are at. I can't seem to find any way to improve my scores against DrussGT, Diamond, or Scarlet. -- Skotty 23:11, 29 September 2011 (UTC)

Congrats from me, too - and to Skotty as well! You guys have really stormed up the rankings of late. It's great to see so many active bots at the top of the rumble. --Voidious 04:12, 30 September 2011 (UTC)

Good job on top 20. I remember how I felt when I broke that. But I think you are expecting a bit much from Nene's developer. I haven't been particularly active since reaching 11th-ish with Nene. — Chase-san 05:20, 30 September 2011 (UTC)

I know, but i did not implement yet bullet shielding, multiply wave surfing and really good movement yet. Also i didn't put any effort in gun improvement --Jdev 08:25, 30 September 2011 (UTC)

Oh nice, passing Scarlet, nice work. I suppose it is high time I got back to work and finished writing my robot... Is what I would like to say, however my movement has so many things I have planned for it, and getting any one of them done requires a complete redesign (again). But they should really push her up the ranks. (Also Nene uses a gun from 2004, should fix that eventually) — Chase-san 15:08, 3 November 2011 (UTC)

Oooh, congrats! Maybe I should try to find time amongst class keeping me busy...

Just notice today, that i already have 137 development versions on Tomcat 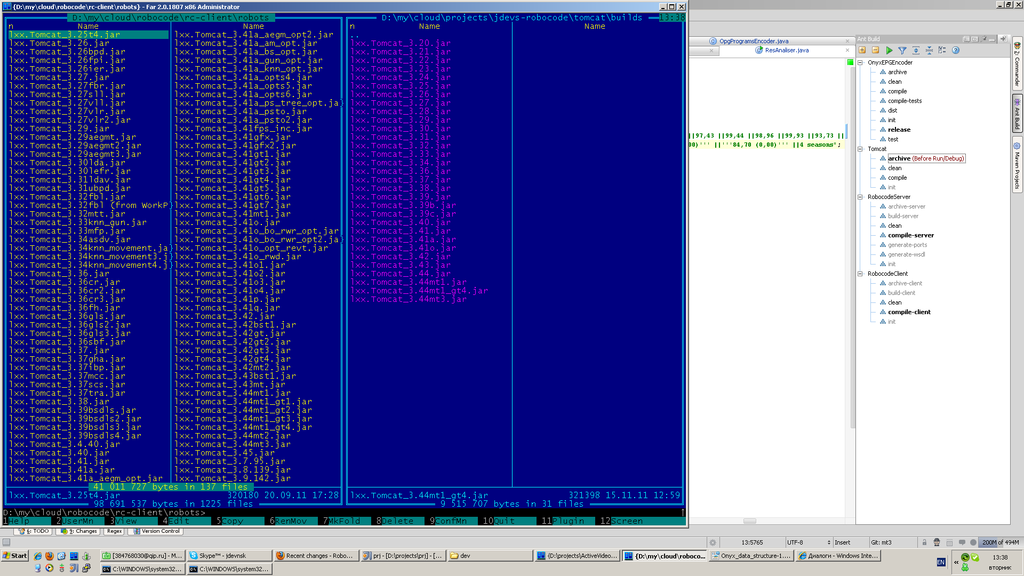 For me quick test (1 battle against every bot in RR) takes about about 1.5 hours.
Also Distributed Robocode output intermediate results after every battle and i wrote simple program which can compare results between same challenges for different challengers, so i can stop testing early, if results after several tens of battles looks worse comparing to last release --Jdev 11:10, 15 November 2011 (UTC)