Fragment of a discussion from Talk:BeepBoop
Viewing a history listing
Jump to navigation Jump to search

0.15 is getting also weird rumble scores. For example, this figure is showing some of the strange results. 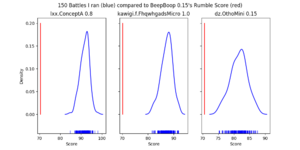 Does anyone know how to see who's producing the weird scores/debug?

That can only be Xor_Sily, that is the only one that has run battles in after you uploaded version 0.15

No, I just used the auto-computed constant.

The cpu constants of Xor_Sily is computed when all cores are used, and currently I’m using only half of the cores as suggested by Rednaxela. So maybe the cpu constant is a little bit loose, making skipped turns happen LESS. If a bot isn’t skipping turns in ordinary configuration, it shouldn’t skip turns on Xor_Sily.

If anyone is logging data, I could help by sending the files.

Isn't using half of the cores also half the performance, so taking twice the time, so ideally twice the cpu constant ?

cpu constant is always single core. by all cores / half cores I’m describing number of clients running concurrently, since GC is also requiring some cores.

I'm not sure I follow: what you are saying suggests that skipped turns should happen more on Xor_Sily right? I assume the reason for BeepBoop's low scores is it skipping lots of turns.

As an aside, I've also noticed that DrussGT 3.1.7 has also dropped 0.3 APS compared to 3.1.6, maybe it is also getting bad battles with lots of skipped turns?

I think it’s some change to energy management. Skipped turns hurt results against weak bots as well, but the decrease seems to be focused near 60+

I mean if you run battles on computers without turbo boost, you should get identical results as Xor_Sily.

Hmmm I'm still not able to reproduce the low-scoring battles. First of all, turning off turbo boost does change the CPU constant for me (it's ~4e6 with turbo boost on and ~5e6 with turbo boost off, I've recomputed the constant both with/without multiple times and it seems reasonably consistent). But even if I use the 4e6 CPU constant with turbo boost turned off, I am getting essentially the same results as in the image I uploaded. What CPU constant does Xor_Sily use? Maybe as a short-term fix you could add BeepBoop to its roborumble.txt EXCLUDE?

Looks like the weird battles are produced on Xor_Sily. I will run some battles using these bots manually on Xor_Sily, to see what's happening.

Btw I'm not experiencing weird results personally, battles ran in local have similar results in rumble. How many cores are u using when running local battles?

Thanks for looking into it! I'm using 4 cores when running local battles.

Yes, I am running on a turbo boost enabled computer.