From Robowiki
< BlackHole‎ | Old
Jump to navigation Jump to search

This robot will not be update for a long time to allow me to develop all planned new techniques. If you want to know my new idea, I'll take it on /Version2Ideas.

Take BasicSurfer, segmented the surfing stat, add rolling average, increased bins to 1001, change BinSmoothing and debugging graphics to something like DrussGT, add a flattener (which look like a hill). Now the movement is complete (I take 2 hours a day for 10 days!) so I started work on gun, at first I take a look at PEZ's VirtualBulletBot, but I don't want to use CustomEvent (I must have good class structure!) so I start on my own. I try to fit the DCBot's gun into virtual gun but it doesn't so I try a simple targeting and took a Pattern Matcher from Simonton's bot :). That's the 0.1.

How competitive is it?
Fairy. Sometimes beat Phoenix in my test (but not Shadow or Dookious)

How does it move?
Wave Surfing: true surfing style base on BasicSurfer. Also has very bad flattener which force-disabled for now.

How does it fire?
Virtual Guns Array:

What does it save between rounds and matches?
Surfing Stat, Virtual Gun rating, GF stats and Pattern data between round. 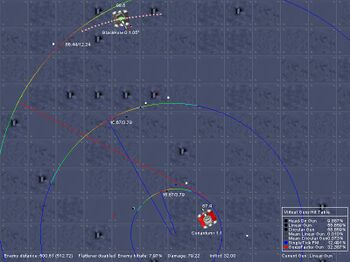 Does it have any debugging graphics?
Yes, it has. I think it as good as in Phoenix
It currently write an enemy distance and hit rate , flattener status, currently gun, and virtual gun rating table. It's also draw enemy waves, its future positions, and virtual bullets.
I think it will win wave competitions if has, the picture may not clear, but I think it has the most beautiful wave ever.
Try it yourself, the currentlt picture is not clear and beautiful.

Does it have any White Whales?
DrussGT, Phoenix, Shadow, Dookious: these my testbed and I still expected them to be defeated :)
(test with top bot are good in Premier League, but I will never got first rank by ELO/APS rating!)

Now added X2, Chalk, Horizon, Ascendent, CassiusClay and SandboxDT (I tried to run DT with my 1.6.2 for long time, now I use 1.6.0 and I can run it!) Those are carefully chose one-on-one testbed and my white whales, too.

What the next for your robot.
I planned to create new movement technique, I will explain it later when it's finished :)
Also with new gun! Current Simonton's gun and RaikoGun is just temporary guns.

Credit should go to: