From Robowiki
(Redirected from VirtualBullets)
Jump to navigation Jump to search 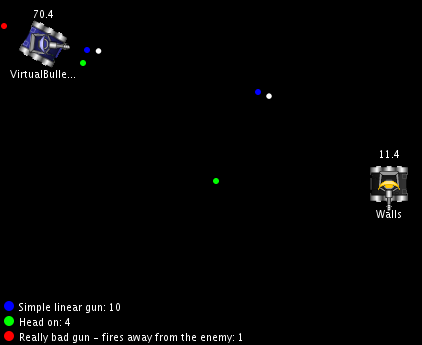 A system that tracks the virtual success rates of different targeting algorithms in order to choose the most accurate algorithm against a specific opponent or situation. Another term for this system is "virtual bullets," referring to the virtual shots that each gun fires.

When firing a real bullet (or possibly every tick), each virtual gun is polled for the firing angle it would use, which is then stored along with the firing location and bullet velocity (a "virtual bullet"). The bot keeps track of which of these shots would have hit or missed the enemy, adjusting the rating of the guns accordingly. Since the enemy cannot see what firing angle was used, it cannot adjust its movement based on what gun you are currently aiming with, so the results should accurately reflect the success rate of each virtual gun.

While many bot authors have experimented with using multiple learning guns, e.g. with different segmentations or mixing GuessFactor targeting with pattern matching, it has often been debated whether this is preferable to using only the gun with better overall performance. Since there is no perfect system for choosing the stronger gun against a given opponent, you will inevitably lose performance against some bots while gaining performance against others.

Historically, one of the most common uses of virtual guns has been using an array of simple targeters, which results in a higher hit rate across a broad range of enemies than any of them on its own. This was a popular method in the early days of Robocode and is still popular among beginner and novice Robocoders.

Among high level 1-vs-1 bots, it is common to have a general purpose gun (with little or no decay rate) and an anti-surfer gun (with a high decay rate and other optimizations for hitting adaptive movement), a strategy popularized by long-time RoboRumble champion, Ascendant.