This page is a tutorial describing how to debug a .NET robot in Visual Studio.

This tutorial builds on top of the 'Create a .NET robot with Visual Studio' tutorial. So if you haven't read the other tutorial, you should do this first and return to this tutorial.

Debugging is used when finding and removing "bugs" which cause a robot to behave in a way that is not intended.

Visual Studio provides a debugger that helps developers to debug their applications, our case that is robots. It is possible to set "breakpoints" in the source code. A breakpoint is a marker that signals the debugger to pause execution when the breakpoint is reached. Code beyond the breakpoint will not be executed until further (debug) instructions are provided.

A breakpoint is enabled (and disabled) by clicking on the left-most side of the Code View containing the source code to debug, or simply by pressing the F9 key on the line where a breakpoint must be toggled: 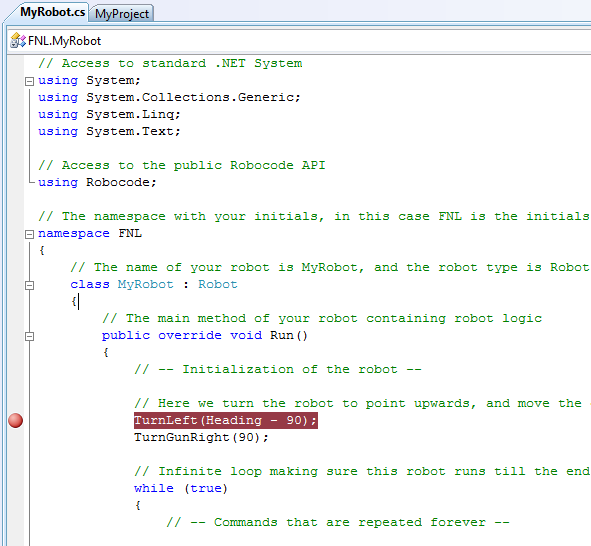 Basic instructions for the debugger are:

In most cases, the "step over" instruction is used to step one line at a time from a breakpoint. The debugger marks the next line that will be executed with a yellow arrow. In fact, the whole line is marked with a yellow background color. 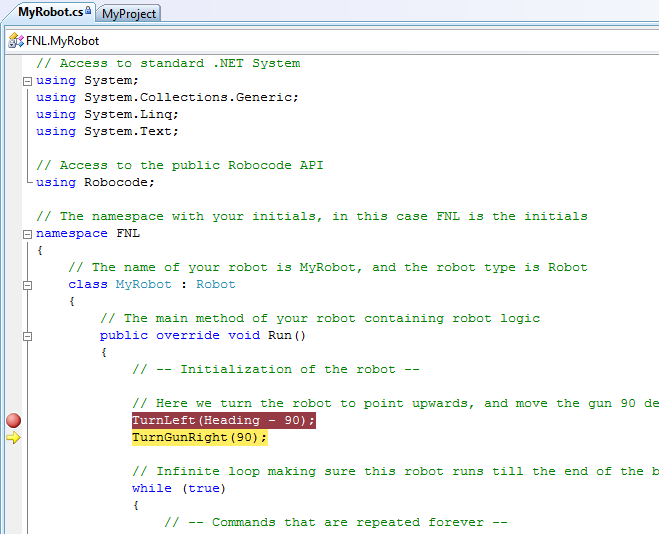 When running a robot in debug mode it is possible to examine the current state of the robot when the code execution is paused due to a breakpoint that is reached. For example, it is possible to have a look at the content of the local variables and the call stack which will be "frozen" at the exact location where the code execution has been paused.

By stepping forward in the code with the debugger beyond a breakpoint, the content of the variables and the call stack will change due to new code being executed. The debugger will mark all changed content with red, which makes it easier to observe what was changed where.

Note that Visual Studio makes it possible pausing code execution on the exact point where an exception occurs. This way you do not have to guess where an exception occurs. It is also possible to set up a "watch", where you can pick one or more variables or properties to watch during the debugging. This becomes handy when you have lots of variables and properties, but only want to watch a limited set of variables/properties.

Setting up a project for debugging with Robocode

Setting up development path in Robocode

By adding the file path to where the debug robot .dll is located, Robocode will be able to find and use this robot in the battle, which is being debugged. Note that it is important the select the Debug dir and not the Release dir. Otherwise, it is not possible to debug your robot with Robocode.

Robocode is starting up using the robocode.bat file located in your Robocode home folder. Now, you can make a copy of this file and rename it into robocode-debug.bat. When you need to start up Robocode in debugging mode, you should run this batch file instead of robocode.bat. You could create a new shortcut for it, and place it on your desktop named 'Robocode debug' or similar, and double-click it, when you need to start Robocode for debugging.

The following option must be added to the robocode-debug.bat:

For example, you could insert the -Ddebug=true between java and -Xmx512M:

With the Standard or Professional edition of Visual Studio a quick method for start debugging is to:

With the Visual Studio 2008 Express Edition, it is not possible to start an external program from the project Debug tab in the Properties dialog, which is possible with the Standard and Professional editions of Visual Studio.

However, there is a trick that will make this possible, so you can let Visual Studio Express start up Robocode, and follow the description in the previous section of this tutorial.

First locate the .csproj file for your project within your solution dir. For example, this file could be located within C:\MySolution\MyProject with the name MyProject.csproj.

The StartProgram must be changed to the full path of the java.exe you use for starting Robocode. The StartArguments must reflect the parameters used in the robocode.bat, as described in the previous section. And finally, the StartWorkingDirectory must be the full path to your Robocode home dir.

Now, Robocode will start up when starting the debugger in Visual Studio Express. 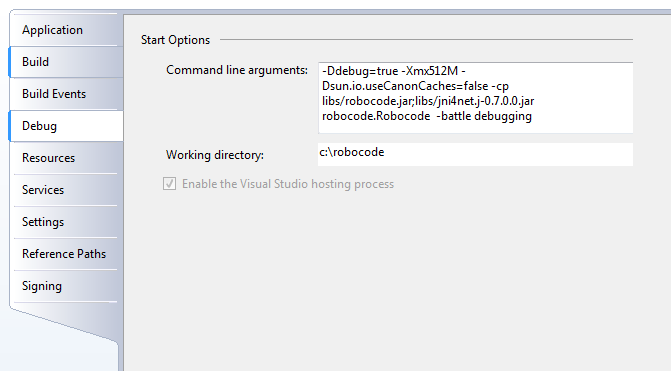 Set a startup battle in Robocode for debugging

When setting up a new battle in Robocode when debugging a robot, the same robot should only be added once to the battle, and at least one other opponent, e.g. sample.Target must be added too. The reason why you should only add your robot once is that the debugger will jump between breakpoints in the source code, as it debugs all instances of the robot in the same time.

With Robocode it is possible to create a battle and then let Robocode start this battle automatically when Robocode is started. This is very helpful for debugging, as you don't need to start a new battle each time you start debugging.

Here is how to create and automatically start up a battle in Robocode:

When playing battles, Robocode will run games randomly. That is, the robots start at random positions, and the random generator pick a seed for the internal randomizer at random, meaning that battles will run differently when starting new battles. However, it is possible to set up Robocode to run deterministically so the battles will run the same way each time a new battle is started.

By running battles as deterministic, it is possible to debug a specific scenario. For example, if a robot misbehaves in round 1 at time = 500, you can make a check in your code like this:

And put a breakpoint on the line with int dummy = 0;. Now the breakpoint will be hit in the first round at time = 500.

In order to setup Robocode to run deterministically, an option must be added to options for Robocode with the robocode-debug.bat or within the command line arguments under the Debug tab in the project Properties, e.g. right after the -Ddebug=true option.

Sometimes you might want to set the starting positions and headings of the robots participating in a battle. Well, this is also possible if a startup battle has been set up already (see earlier section here).

Using a text editor, the startup battle (e.g. debugging.battle) can be extended with a line containing the robocode.battle.initialPositions definition, which must be added.

Example of setting the robocode.battle.initialPositions:

(Example taken from the intro.battle in the battle dir found in the home dir for Robocode)

The initialPositions is a comma-separated list of sets. For each robot, the initial x and y coordinates and initial heading (in degrees) can be specified with a set in this format:

In the example above we have 3 sets:

The first set is for the first robot, next set for the second and so forth.

If 5 robots are participating in the battle in the example, we only set the initial positions for the 3 first robots specified. The two remaining robots will start with random positions and headings. Also note that with the second set, we have set all values to question marks, meaning that the second robot will start with a random position and heading.