When firing, the Maximum Escape Angle (MEA) is the largest angle offset from zero (i.e., Head-On Targeting) that could possibly hit an enemy bot, given the Game Physics of Robocode.

Now, using the Law of sines:

With a maximum Robot velocity of 8.0, a theoretical Maximum Escape Angle would be asin(8.0/Vb). Note that the actual maximum depends on the enemy's current heading, speed, and Wall Distance.

The above gives a solid estimate of the maximum escape angle, but in practice, it's slightly different. 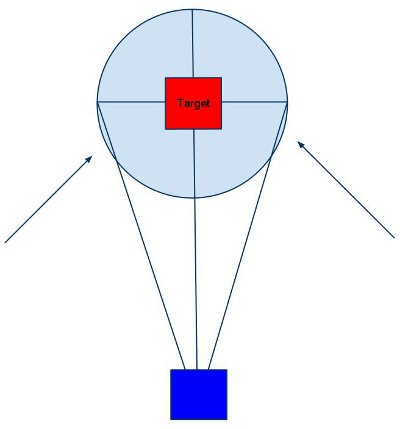 Notice that the triangle formed by assuming PI/2 as the lateral angle of our target fails to cover a small part of all places the target could go. For most cases, it's entirely negligible, as a curved path reduces the time it takes for the bullet to reach the target. But in the case of very specific firing strategies, the fault can become apparent, and the maximum escape angle must be redrawn.