From Robowiki
Jump to navigation Jump to search
Welcome to Robocode!

Wikipedia has an article about:
Robocode

Robocode is a programming game where the goal is to code a robot to compete against other robots in a battle arena. The player is the programmer of the robot, who will have no direct influence on the game. Instead, the player must write the AI of the robot telling it how to behave and react on events occurring in the battle arena. So the name Robocode is a short for "Robot code".

The game is designed to help you learn Java, and have fun doing it. Robots are written in the Java programming language, and the Robocode game can run on any operating system supported by the Java Platform, which includes all common operating systems like Windows, macOS, Linux etc.

Robocode's battles take place in a battlefield, where small automated 6-wheeled robots fight it out until only one is left. Please notice that Robocode contains no gore, no blood, no people, and no politics. The battles are simply for the excitement of competition that we love so much. There are explosions, however, but these can be turned off if they are offending. :-)

If you have not done so already, the first step is to download and install Robocode. Once you have installed Robocode, you should run a few battles to see how it works, then move on to building your first robot.

The Robocode game was originally started by Matthew A. Nelson, aka Mat Nelson, as a personal endeavour in late 2000 and became a professional one when he brought it to IBM, in the form of an AlphaWorks download, in July 2001.

In the beginning of 2005, Robocode was brought to SourceForge as Open Source with Robocode version 1.0.7. At this point, the development of Robocode was somewhat stopped. In the mean while, the Robocode community began to develop their own versions of Robocode in order to get rid of bugs and put new features into Robocode, the Contributions for Open Source Robocode and later on the RobocodeNG project by Flemming N. Larsen.

For more history, read the Chronicles. 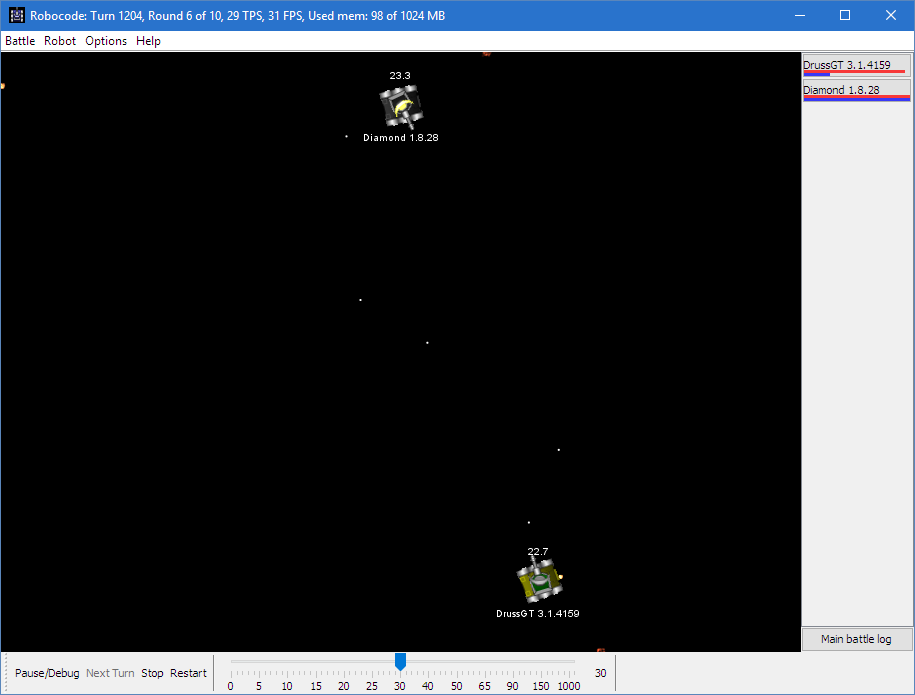