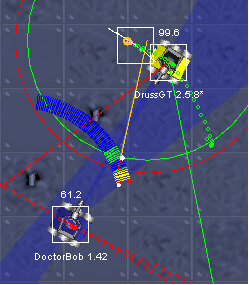 DrussGT surfing and painting. Note how on DoctorBob's wave, the surfing dangers which would intersect with DrussGT's bullet are set to 0. 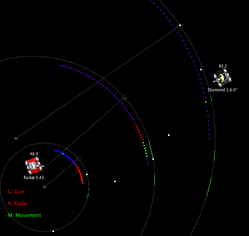 When a bullet intersects an enemy wave, the range of firing angles on the wave that would collide with the bullet are guaranteed to be safe by the time the wave reaches its target. As the enemy wave travels outward, this safe region traces out a region of the battle field as if your bullet cast a shadow of safety.

Bullet Shadows are similar to Bullet Shielding. While bullet shielding attempts to intercept actual enemy bullets, bullet shadows are used to determine parts of an enemy wave that are 100% safe.

This type of bullet shadowing involves aiming and firing the gun with the goal of creating large bullet shadows, and then moving into those shadows to dodge bullets. A robot implementing this type would likely use the passive method as well when firing to hit the enemy.

This method takes advantage of natural bullet shadows that are formed by normal aiming and firing at the enemy. This is likely done by incorporating the information into Wave Surfing danger calculations. Most robots implementing bullet shadows are of this type.

These are the robots that are known to use this technique.