There was some discussion of this recently and I just read some more on User talk:Rednaxela/SaphireEdge, so I thought I'd post how it's done in Dookious and Diamond. Of course, trust your own findings on how valuable this is, but I have personally found precise MEA to be a good thing, both in TC and the rumble. All of these steps use Precise Prediction, just like in Wave Surfing.

This is all in Dookious/utils/Wave.java and Diamond/utils/DiaWave.java. In Diamond, I don't use this for GFs, but I use (precise MEA / traditional MEA) as the wall distance attribute, since I think wall distance is meant to tell you how much the wall is impacting the enemy's movement.

Clarification: I now use this for GFs in Diamond, and orbital wall distance - at the time, I was using Displacement Vectors in the gun. --Voidious 16:58, 31 May 2012 (UTC) 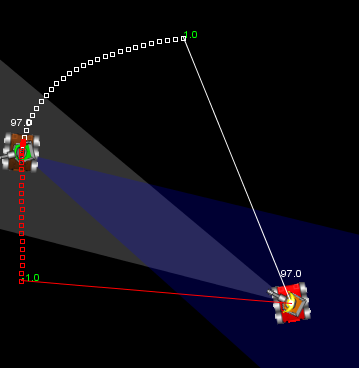 To be fair Voidious implementing this can be quite a trick when you don't have a working Precise Predictor. I fixed that on mine, I used a stick of 120 in this image, but having read your comment here, I think I might try and lower it before I try it in actual use in my gun. — Chase-san 10:04, 7 July 2010 (UTC)

I also notice that the travel lines can get strange if the enemy is pointing in a non-optimal direction. — Chase-san 10:10, 7 July 2010 (UTC)

Smashing it down to bins

Although this page is called 'Precise', when converting it into (VCS) bins it is not as accurate as it first seems. Just take the very simple example of reversing. It that case the enemy can travel less far than just asin(8.0 / bulletspeed). But how do you handle that? Do you make every bin a bit smaller, do you 'overlay' a few bins as they cover the same area, or do you do nothing about it.

When the enemy approaches a wall, the situation becomes even more complicated. The overall angle becomes smaller, but how to handle the size of the bin. Just make every bin a bit smaller is one option. An other option is to make the first few bins (close to the HOTangle) the normal size, but when the enemy is turning towards you, the size of the next bins should become smaller, e.g. dynamic binsize. These situations are quickly becoming to complicated, although adapting to a separate constant binsize for either continuing/reversing seems acceptable. Note that the binsize (max escape angle) could vary for every wave!

In the latest gun version of GresSuffurd I use another approach, simulated precise MEA, but as expected it is not ideal either. I just use the standard theoretical MEA, calculate the real MEA, and ignore all unreacheable bins. I then just hope that my wall-proximity segmentation can handle the situation. The advantage of this solution is that the binsize is always the same, and that bullets that would never hit are traded in for bullets with a chance to hit. Ofcourse there probably are better solutions, so fire away! --GrubbmGait 14:04, 4 April 2011 (UTC)

Yes, I just scale the bin size smaller in Dookious (and Diamond is similar, but no bins). You're right the MEA / bin size varies per wave, but why is that bad? GF 0.5, to me, means he went half as far as he could have in the current direction - slowed to half speed or paused a couple times. GF -1 means he immediately reversed direction and never stopped. I think that's the right way to learn, especially against random movements. Without precise MEA, GF 0.5 and -1 do not fit those descriptions. To me, GF without precise MEA seems like halfway between a raw bearing offset and the true idea of a "GuessFactor". (Well, ok, maybe 85% of the way... :P)

I believe Gaff also just caps the firing angle with whatever precise MEA he's calculated, which seems reasonable. Kind of like WaveSurfingChallengeBotB. I've been doing that with my perceptual gun experiments, but I really only gain a few hundredths of a percent in hit-% once I add the cap. I'm not sure how much that measurement translates to "real" guns. I could actually test a lot of this stuff very quickly with WaveSim... =)

Below is a diagram of some various ways I have played with for mapping factor angles into my factor arrays. There are other variations. The last one is interesting to me because it doesn't fix the zero factor to the middle bin. Most versions of XanderCat just cap the bullet velocity estimated range as in the first image, though I'm doing something different for XanderCat 11. -- Skotty 20:03, 22 November 2011 (UTC) 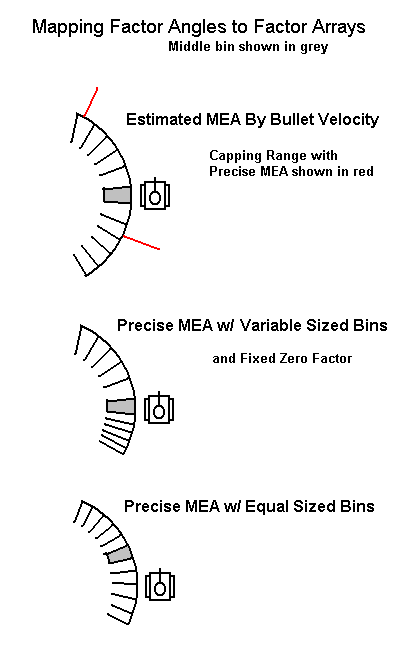 I use a KD Tree to log data, and use KNN to pull that data back out of the tree, but I then take that data and use it to populate a factor array, which is then used by the drive and gun to decide on where to drive or aim. I've been referring to this as hybrid DC. So I kind of use DC, but I still have factor arrays as well. -- Skotty 23:09, 22 November 2011 (UTC)

Well, the way precise MEA affects the mapping of angles to GuessFactors is just as relevant even without bins. Maybe Chase was just commenting on the original smashing to bins idea? My setup is like the middle image. I never considered that 3rd style, that's kinda funny... The only other change I've really considered is changing GF=0 to be a precisely predicted stop instead of position at fire time. I think DrussGT tried this recently, not sure how much impact it had. --Voidious 23:21, 22 November 2011 (UTC)

There are no threads on this page yet.
Retrieved from "http://robowiki.net/w/index.php?title=Talk:Maximum_Escape_Angle/Precise&oldid=24616"
Category: