It's built on a modular framework, coded cleanly. Occasionally I'll post snippets for free - see Watermelon/Code. Currently developing in Eclipse. Early on I used an educational IDE called BlueJ (its interface is a UML diagram, very pretty). I test by running battles against a few favorites, including CigaretBH and some others. For more specific testing I post a release to RoboRumble and see what happens.

Uses Wave Surfing, implemented in as straightforward a manner as I can manage. I used Simonton's non-iterative Wall Smoothing code, and my own precise prediction for future positions. Bot width is considered, averaging the danger from covered bins. There's no dive-in protection; bot width takes care of that.

A rolling average ensures that the bot accommodates adaptive targeters.

Guess Factor gun, segmented on every combination of velocity, acceleration, time since last reversal, and lateral wall-distance. Segments are chosen based on the ratio of their maximum value to their average value, with a strong penalty for having too few hits. A rolling average ensures that the bot accommodates adaptive targeters.

How Hard to Fire

If the selected firing segment has enough hits, and a hit rate over 25%, fire a strong bullet, varying by how good the segment really is. If the enemy is close, fire stronger bullets. If energy is too low, scale all these back proportionally to how little energy I have.

Uses the same radar in melee and in 1v1 conflicts - turns the radar just past the furthest angle that the least recently seen bot could have reached since it was last spotted. 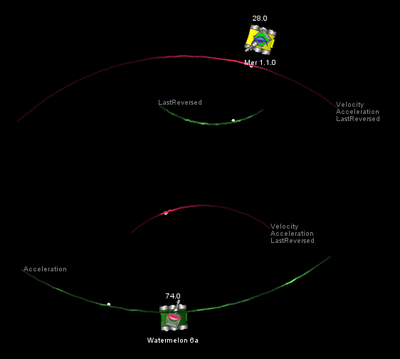 Paints waves for enemy bullets and its own bullets, with brighter segments where the bins are fuller. Also marks precisely predicted future positions. Waves are labeled with the applicable segmentation axes.

What I'm Working On

Another bot - this one's retired.