From RoboWiki
From Talk:Flattener
Jump to: navigation, search

In theory, it should be possible to hit a flattener more often than a random movement because you know the flattener will avoid where it last was.

In practice, against top tier RoboRumble guns, which would be harder to hit, a typical flattener that logs where it last was and avoids it, or a type of random movement that moves to a random guessfactor each wave?

I don't understand, what's unethical about it?

Sorry, my wording wasn't clear: in order to have a better score against all flatteners, you have to exploit it like [LittleBlackBook] does(which I don't really approve btw) because otherwise your targeting will most likely be average against flatteners.

Ah, that makes sense. But against the guns in ScalarN or DrussGT, would a standard flattener or random movement work better?

Remember there is more than one wave in the air, typically. So even if your random movement is completely random, once you layer a few different waves on top of each other, the first wave constrains the second wave which causes a more predictable profile. What flattening does that random movement doesn't is put that extra effort in to reach the further angles, effectively lowering the peak hit probability. You also have access to bullet shadows, letting you reduce your accumulated hit probability even further.

The implementation differences cause the internal state to diverge so rapidly that I don't think this is really possible to exploit. Certainly I've tried, even looking at both sides of the state to see if I could make something that works, as have many others, in many weird and wonderful ways.

However even the best anti-surfer guns have lower hit rates against any surfer with flattening, than a relatively simple KNN gun gets against the best Random movements. So I would call this approach to guns impossible, and instead you just need to try to adapt as fast as possible for anti-surfing, and use different types of stats that they don't have, not try to simulate their dodging of their simulation of your gun. And for movement, use a flattener, and make your stats a little different from everyone else's flattener.

My posts are lost due to mysql error ;(

Thankfully I had screen shots 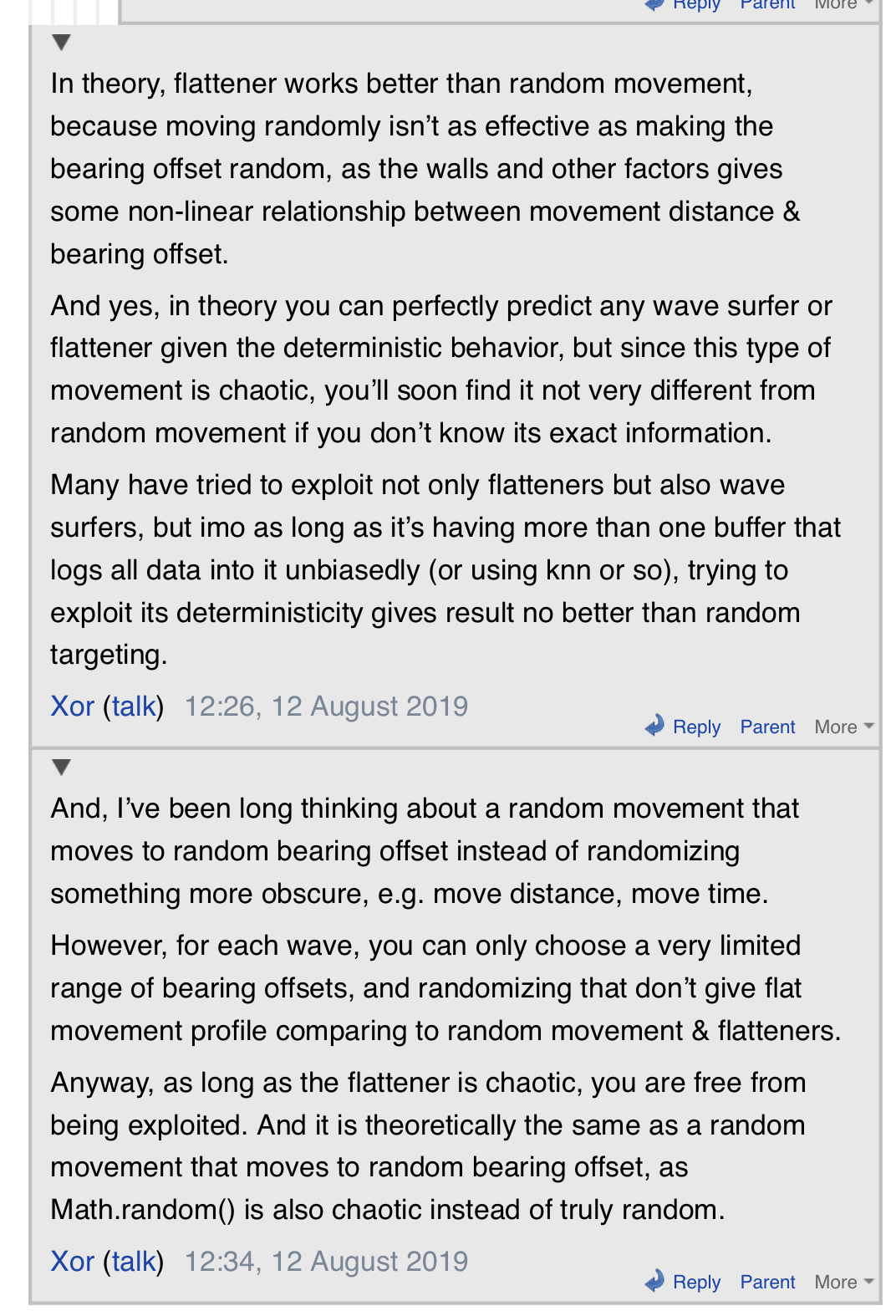 Cool! Your responses gave me the idea to try to stay at really close range so only one wave is in the air, but then I realized that then the enemy also will have only one wave in the air so it wouldn't help :/

I will definitely use a flattener in my megabot, thanks for the advice!