From Robowiki
< Waves
Jump to navigation Jump to search 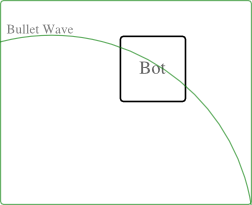 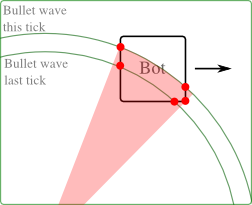 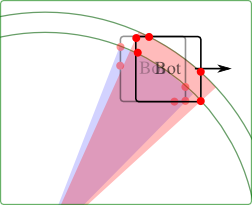 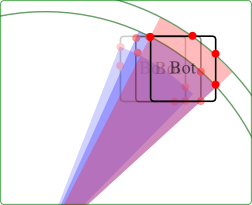 An estimation of this range is used in many bots. An angular range of Math.atan(18/distance) * 2 assumes a stationary bot with a bot width of 18. Simply (18/distance) * 2 is accurate at most distances, as well, without any trig operations.

Note that in Robocode physics, bullets act as a line segment. Between ticks:

So you need to examine the area covered by the advancing wave and the initial position of the target bot. Specifically, you need to account for:

The minimum and maximum angles from the wave source to any of these points form the precise intersection range for this tick. Combine the ranges from every tick to get the entire range of firing angles that would hit the target bot.